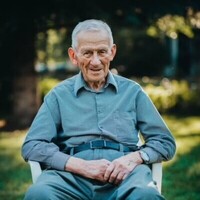 Visitation will be held 5-7 p.m. Thursday, May 26, at Eastgate Funeral Service, 2302 East Divide Avenue, Bismarck. A prayer service will start at 7 p.m.

Burial will be held at St. Mary’s Cemetery.

Helmuth was born to Gustav Gries and Rosie (Moser) Gries on Sept. 24, 1927, at home. He grew up in a small house in Goodrich, N.D. with his sister, Meta and brother, Adelbert. From an early age, Helmuth developed a love for cars and basketball.

Upon graduation of high school, he was drafted into the United States Army where he served two years in Japan during WWII.

Shortly after his return, he married Agnes Piatz in June of 1954. The two of them moved to Bismarck, ND, where his love for cars lead him to several jobs working at car dealerships in town.

Many years later, he was offered a position as a section crew worker for the Soo Line Railroad. He continued his career with the railroad until his retirement in the early 90’s.

Helmuth enjoyed golfing, watching basketball, having breakfast with friends, afternoon coffee with his sister, looking for a deal on his next car and helping others. He spent countless hours mowing the lawn for his friends, family, and neighbors. He also had a love for gardening and shared this passion with his sister and his granddaughter.

Through his whole life, he maintained a strong sense of humor that brightened the lives of those he met and his family.

He was preceded in death by his mother, Rosie Gries; father, Gustav Gries; brother, Adelbert; wife, Agnes; many friends; and extended family members.

He will be greatly missed by all those who knew him.

The family would like to extend a special thanks to all those who helped care for him during the last few years of his life.