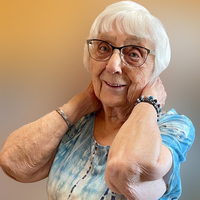 A delayed streaming of the service may be viewed by accessing https://www.mtmsales.net/thomas

Vivian Carol was born on August 6, 1933 in Page, ND to George and Genorah (Paulson) Still. She was raised and educated in Page until she was 11 years old. The family then moved to West Fargo and she continued school there until 1949. She worked at Armours Inc., where her father was also employed, before moving into Fargo where she worked as a waitress for a time.

She met the love of her life, Ben Heintz and they married On April 13, 1957. They made their home in Fargo. They lived in multiple states and countries while Ben pursued his military career. After Ben’s retirement from the service in 1973 they moved to Stanley, ND where they owned and operated Hardware Hank until retiring in 1991. In 2005 they moved to Minot, ND.

Vivian was an avid card player and games player. Whenever you visited, you were obligated to sit and play for a bit. She was a super entertainer and there was never a shortage of food on her holiday table. She loved family more than anything and held family night for several years.

Vivian’s funeral will be held at Thomas Family Funeral Home on Tuesday May 24, 2022 at 10:00 a.m. A delayed streaming of the service may be viewed by accessing https://www.mtmsales.net/thomas
Visitation: Monday from 3:00 – 5:00 p.m. in the funeral home.
In lieu of flowers memorials are preferred to ND Veterans Cemetery at Mandan, ND.