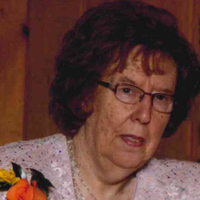 A memorial service will be held 1 p.m. Saturday, May 21, at Parkway Funeral Service, 2330 Tyler Parkway, Bismarck.

Visitation will be held from 5 to 7 p.m. Friday at Parkway Funeral Service, Bismarck.

Gloria was born April 29, 1942, to Clark and Etta (Brown) Brindle. She was raised on the family farm southwest of Hazelton. She was the youngest member of her family which included three brothers: Vernon, William, and Charles; and two sisters: Fern and Evelyn.

Wayne and Gloria were married May 26, 1968, at the First Presbyterian Church in Hazelton. They resided in the Hazelton area until 1969.

She graduated from Hazelton High School in 1960. After high school she graduated from Capital Commercial Business College in Bismarck and was employed by KEM Electric Cooperative in Linton from  1962 until 1969. In 1969 they moved to Bismarck where Wayne worked in construction and also as an insulator at the power plant in Center. Gloria worked for the Labor Union Office in Bismarck. In 1972 they moved to a farm northwest of Hazelton, owned by Robert Bishop. They moved to their present farm, seven miles north of Hazelton, beside Highway 83, in 1977 and continued farming until Wayne’s death on Oct. 8, 1991.

Gloria worked as the clerk for the Buchanan Township and worked 24 years at the Emmons County Record in Linton until she retired.

She is survived by her daughters; Lynette (Jim) Odenbach and Tammy (Donnie) Klein, grandson; Tanner Klein, and granddaughter; Krystal Klein.