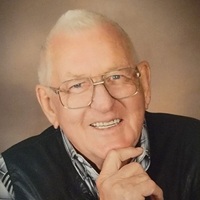 Visitation will be held on Tuesday, May 10 from 5 to 7 pm at St. Nicholas Catholic Church in Garrison.

Herman is predeceased by his parents Joe and Blanche Evenson Ruhland and brothers Vincent and Leo.

Left to cherish and remember Herman’s amazing laugh, smile and generous heart are his close family, wife of 56 years Linda Metz Ruhland, and children Michael, Theresa, Paul, Margaret, Jerome, Steve, Clarence, Barb, Liz, Rita and Will. His siblings, Sister Anna Rose, Margaret, Joan, Mark and a network of people around the country who call Herman a close friend will miss him and remember him with a smile and twinkle in their eye.

Herman was born on November 7, 1937, in Garrison North Dakota and although later in life lived in Washington State and traveled extensively through Western United States, he never thought of any where but Garrison as his home. Herman spent his life working hard for one reason: His family. Herman cherished his 11 children and 13 grandchildren (with one more on the way) and beamed with pride every time he talked about them.

Herman’s love for life showed in his enthusiastic interactions with any one willing to strike up a conversation with him, and he loved his time on earth. He said he lived during a great time where he was fortunate enough to live during a time that allowed him to farm with a team of horses, saw ice from the Missouri river for the icehouse, get a TV, and now use a smart phone that allowed him access to any information he could ever want. Herman wanted you to know that he lived a good life, raised a great family with Linda and is a proud man.

In lieu of flowers the family prefers memorials to the Knight’s of Columbus, Elks Lodge, Moose Lodge or the VFW.

To view a livestream of the service go to www.facebook.com/garrisonthompsonfh/

To view a livestream of the funeral service go to www.facebook.com/garrisonthompsonfh/