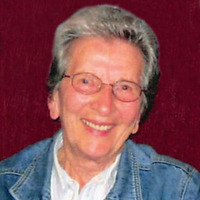 View the service livestream at the following link: https://www.youtube.com/watch?v=5VykqAfLciA

Helen was born on March 14, 1930, to George and Hilda Kavonius in Wing, North Dakota. She was the youngest of their ten children. Educated in Wing and Bismarck after the family moved here, Helen graduated from Bismarck High School in 1948. She began her professional career working in insurance adjustment which later led her to Murphy Insurance, a general insurance agency. She was not only the office manager, but an agent as well, later becoming a partner in the business. She was by all accounts an excellent employee.

After high school Helen and her twin sisters, Elma and Elna joined a women’s fast-pitch softball league. They had much success, culminating in back-to-back championships in 1954 and 1955.

Helen, her sisters and close friend, Sylvia Goike, started bowling and once again had success, both in team competition and singles. Helen especially, had individual notoriety in the national WIBC ‘Queens’ competition. One could say that she was a true pioneer of women, not only in the business world, but in athletics.

Following the death of their father in early 1948, Helen, Elma and Elna made a home for their mother. She resided with them until her death in 1968.

In the mid-1960’s she, her sisters and Sylvia began building their lake cabin at Lake Isabel, working with brother-in-law Raymond Josephson. Raymond was a skilled carpenter, but they did much of the work themselves, gaining many skills that came in handy throughout their lives. They spent many weekends there, thoroughly enjoying it and sharing it with family members and friends.

In the mid 1990’s, following the deaths of Elma and Elna, Helen and Sylvia began spending winters in Arizona and owned a home in Mesa. They really enjoyed being able to be out walking their dog while those in North Dakota were shoveling snow. In more recent years Helen’s health was deteriorating. Following Sylvia’s death in February 2019, it became more and more evident, so she was unable to spend another winter in Arizona. In the end, she was residing in a nursing home in Spring, Texas, close to two of her nieces.

She was preceded in death by her parents, all of her siblings and fifteen of her nieces and nephews.

In lieu of flowers, the family requests memorial donations to be designated for First Lutheran Church of Bismarck or Central Dakota Humane Society in Mandan.