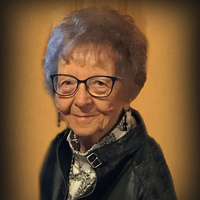 To view a streaming of the service select PREVIOUS RECORDINGS at https://bethanylutheran.tv/

Lavon was born April 17, 1930, in Minot, a daughter of Elmer and Nelva Klimpel. She grew up on their farm/ranch in the South Prairie area and went to country school until 8th grade when she started school in Minot. She graduated from Minot High School in 1948.

She met the love of her life, Adonis “Don” Sandvold in 1947, and they were married November 26, 1950, at Bethany Lutheran Church in Minot. Six months after they were married, Don was called into the service and they moved to Alexandria, VA for a short time while Don trained for the Korean War. Lavon came back to Minot until Don returned two years later from the war. They were happily married for 70 amazing years before Don passed away on February 28, 2021.

Lavon was very proud of her many jobs throughout her lifetime and prided herself on “never sitting still.” She graduated from Minot Business College and worked for many businesses in Minot including Northwestern Telephone Company, Sears Roebuck, Krebsbach’s International Harvester Dealership, Minot Sash and Door, and Norwest Bank where she had a long banking career and later retired from. After retiring, she was a successful saleswoman for Walter’s Women’s Wear for several years and she began working as a volunteer for the Norsk Hostfest. She volunteered for 25 years and received a special award from the Norsk Hostfest Association.

Lavon was very proud of her many accomplishments and how hard she worked her entire life.

Lavon was a fashionable lady and was always dressed in classy clothes, even at home, and her favorite color to wear was navy blue. Lavon was the ultimate hostess and decorator for every holiday and was a phenomenal baker and cook, even though she always said she wasn’t a good cook! She excelled at crafts when younger including cross stitch, needlepoint, and calligraphy. She also helped organize several high school class reunions. Lavon was the best wife, mother, and grandmother to her family.

She will be deeply missed more than words can say and special memories with her will be forever cherished. She was preceded in death by her parents, sister, Marlene Pankow, and her husband, Don.

Celebration of Life Service: 11:00 a.m. Thursday, May 5, 2022, at Bethany Lutheran Church, Minot. To view a streaming of the service select PREVIOUS RECORDINGS at https://bethanylutheran.tv/
Interment: Rosehill Memorial Park, Minot
Visitation: Wednesday, May 4, 2022 from 4:00 p.m. to 6:00 p.m. in Thomas Family Funeral Home, Minot.
Memorials are preferred to American Cancer Society or the ND or MN Chapters of the Alzheimer’s Association.