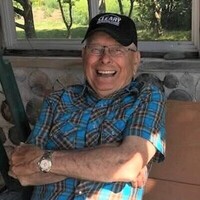 Myron Lyle Bornemann, 88, Pick City, died of kidney failure on April 21, surrounded by his family at Augusta Place in Bismarck.

A memorial service will be held at 11:00 a.m. CST, Wednesday, April 27th at Parkway Funeral Service, 2330 Tyler Pkwy, Bismarck. The family will begin greeting guest an hour before the service starts.

Myron was born on June 26, 1933 in Hannover, ND to Irene (Scherer) and John Bornemann. He grew up in rural Hazen and graduated from the parochial school in Hannover with an 8th grade education.

In 1950, Myron met Yvonne Bowers at a dance hall in Beulah. They were married on July 6, 1952 and had four children, Lylette, Cynthia, Tami and Les. Myron and Yvonne made their home on a farm south of Pick City. He was an extremely hard worker and helped build the Garrison Dam and retired from the fish hatchery after 30 years. In his younger years, Myron enjoyed taking Yvonne on his gold wing motorcycle on many trips to Sturgis. He had a passion for building equipment, hunting, fishing and gardening; he especially enjoyed making pickles to share with his family and friends.

Family was the number one thing for Myron, he especially loved spending time with his grandchildren. Myron had a strong faith in God and will be most remembered for his contagious laugh, corn on the cob eating skills and his talent of gunsmithing and making knives.

Myron was preceded in death by his parents and grandson, Dusty Richter.