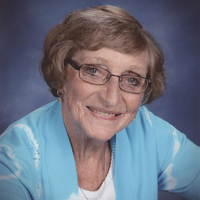 Dorothy was born January 6, 1936, in Rugby, North Dakota, the daughter of William and Myrtle (Dokken) Meyer. She was raised and educated in Rugby and graduated from Rugby High School in 1954. She attended Minot State Teacher’s College and was united in marriage to Virgil Miller on July 21, 1956, at Rugby.

Dorothy and Virgil made their home in Rolette and Parshall for several years where Virgil taught and coached. They later lived in Grand Forks, Great Falls, Mt, and Fort Worth, Tx before settling in Minot in 1970. Along with raising their three daughters, Dorothy worked outside the home. She worked at Consolidation Coal Company and Minot Livestock Auction. In 1977 she joined NSP – Northern States Power (later SRT) where she enjoyed a 20-year career. Dorothy met many wonderful people at SRT where they all referred to her as “Gramma”. She retired in 1997. In January 2018, she became a resident of Edgewood on Dominion in Bismarck.

She was a longtime member of First Lutheran Church, Minot. The family enjoyed spending time camping, and later, at lake cabins at Strawberry Lake, Van Hook, and Lake Metigoshe. Dorothy loved music. She was an accomplished pianist and played several instruments. She enjoyed crossword and word search puzzles, gardening, and her beautiful flowers. Her true enjoyment came when she became “Gramma Dot”. She loved following and attending the grandsons’ Minot High School activities and athletic events. In 2006 she became “Great Gramma Dot” and her love grew.

Dorothy is preceded in death by: Virgil, her husband of 50 years, parents, and siblings: Dolores Vangsnes, Joyce Scott, Will Meyer, and Jerry Meyer.