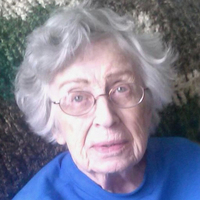 Doris Ida Mueller passed away April 25 at Knife River Care Center in Beulah, ND. She was 99. Born April 2, 1923, at their home near Russell, she was the second daughter of Edna and Fred Miller, who had eight children:  Irene, Doris, Helen, Viola, Betty, Raymond, Eileen, and Carol. Doris grew up on a farm; she loved music and the outdoors and would often call attention to such things as the sounds of a meadowlark or the cottonwoods in the breeze. Before marriage she worked in child care in Minot. Then she went to a barn dance and met someone special.

Doris married George Mueller on her eighteenth birthday, and they spent a year in California before returning to North Dakota to begin farming in the Granville area. There they reared two daughters, Phyllis and Priscilla.

Doris, a skilled self-educator, was an involved mother and teacher to her daughters and insured they learned homemaking skills, had the opportunity to travel, and received college degrees. An excellent seamstress, natural cook, and earnest gardener, Doris used these talents to start a 4-H club in the area and participated in the Homemaker’s Club. Like most farm wives, she helped to run a business while keeping a perfect home where she was somehow able to mysteriously create large, enticing meals for drop-in company.

After the passing of George in 1981, Doris moved to Minot where she became involved in service at St. Mark’s Lutheran Church and enjoyed many friendships and activities there.

She had great interest in the lives of her children and grandchildren all of whom enjoyed her delightful sense of humor, but in her latest years memory loss overcame her vibrancy.

Doris was preceded in death by her parents; husband of 40 years, George; son-in-law, Kenneth Scheet; her siblings, Irene, Helen, Viola, Betty and Raymond.

In lieu of flowers or donations, perhaps one might perform a kindness for someone or volunteer a service; Doris would like that.