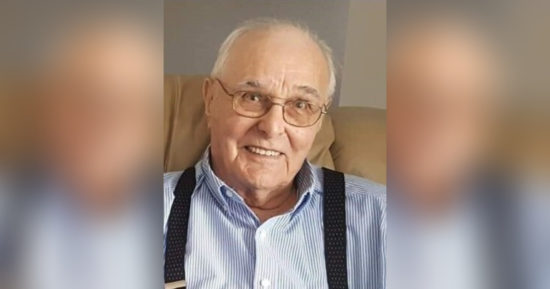 Tony was born to Anton and Julia (Scheetz) Hatzenbuhler on November 12, 1921, in Odense, North Dakota, the fourth of eight children. Surrounded by family and friends, Tony celebrated his 100th birthday this past year, a milestone he credited to fully enjoying life and regular shots of homemade red eye. He will forever be remembered for his strong work ethic, love for family, humble and kind nature, sense of humor, and patience.

Tony was raised in Ft. Rice on his family farm and attended country school through the 8th grade. He worked on the farm along with his siblings until his draft into World War II in 1942. Tony proudly served at the same time as two of his brothers, John and Matt, and together the three of them had the privilege of being chosen for the North Dakota Honor Flight to Washington DC in 2009.

Tony met his lifelong love, Helen (Schmidt) shortly after getting out of the Army in 1946. They met at a dance on Feb. 3, 1946, and were married on Oct. 7, 1947, at St. Johns Catholic Church in Odense. They farmed in the Solen area with their six children until 1974, when they moved into Mandan. Tony worked for Melroe for three years before being employed with the Mandan Public Schools until his retirement in 1992.

Tony and Helen were honored as the longest married Catholic Couple in North Dakota in 2021, after celebrating their 74th wedding anniversary. “I’ve always loved him,” Helen said of Tony when interviewed for this honor.

Tony and Helen were active and loyal members of their parish, St Joseph’s Catholic Church in Mandan for over 48 years and Tony was a proud lifetime member of the American Legion Club.

Tony and Helen made their home in Mandan for 46 years and together moved to Edgewood in 2020. For the past several months, Tony resided at the Bismarck Baptist Home where he lived at the time of his death.

He was preceded in death by his parents; five siblings; daughter-in-law, Karen Lundstrom; and grandchildren, Jeremiah and Tara Hatzenbuhler. Tony’s brother, Matt, also joined him in heaven just hours after Tony’s death.

A joint celebration of life for both Tony and Matt will take place on Monday, April 25, 2022, at St Joseph Catholic Church at 10:30 AM. Both will be buried with military honors at the North Dakota Veterans Cemetery. Visitation will take place on Sunday, April 24, 2022, from 5:00-7:00 PM at Weigel Funeral Home, Mandan, with a Rosary/Parish Vigil at 7:00 PM.

In lieu of flowers family requests that donations be sent to the North Dakota Veterans Cemetery in Mandan, 1825 46th St, Mandan, ND 58554.