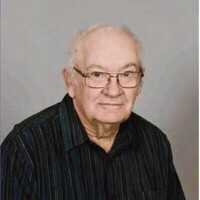 Quincy Clark Maw, 86, Tappen, passed away peacefully at CHI St Alexius Heath in Bismarck on April 11th after a long battle with Parkinson’s with loving family by his side.

Reverend Gary Juergens will officiate services at 2:00 PM, Thursday, April 21st, at St. John’s Evangelical Lutheran Church in Tappen. The family will begin greeting guests an hour before the service.

Quincy was born at the family farm in rural Tappen (Westford Township) on April 18th, 1935. He was the son of Ira (Kid) and Hulda (Sonnenburg) Maw. He was raised on this farm and attended rural and Tappen public schools. Quincy enlisted in the United States Air Force and served our country from 1953 to 1957. He attended the State School of Science in Wahpeton, and NDSU Fargo, graduating with a degree in mechanical engineering.

Quincy and Caroline were united in marriage on May 31st, 1959. They farmed small-scale organic grains and raised Rambouillet-cormo sheep, and at one point lambed out over 1000 ewes. Quincy retired in 2012 and remained on the farm. He enjoyed peace and quiet while sitting on his deck, driving to visit neighbors and his friends at the Tappen Oil Company, and chatting with friends and loved ones who stopped by.

Quincy was a faithful member of St. John’s Evangelical Lutheran Church, Tappen, where he was baptized, confirmed and married. He served on the church council and was township supervisor for many years. He helped establish Equity Electronic Auction in Steele. He was a hard-working, simple man with a sense of humor.

He was preceded in death by his daughter, Lori K Metz, granddaughter, SGT Kayla Hoff; his parents, one brother, Clayton, and sister, Elva.