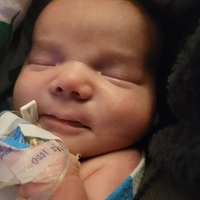 Roman Alexander Kuss was born on April 1, 2022 to Jared and Alistair Kuss. Weighing 7 lbs. and 11 oz. and measuring 19 inches long, Roman arrived in this world with a resounding cry. With his full head of beautiful brown hair and chubby cheeks, he immediately brought an immense amount of joy to his parents.

Roman was diagnosed before birth with multiple complex heart defects, but upon birth those diagnoses were discovered to be much more severe than originally thought. At little more than 12 hours old, Roman went into emergency heart surgery and pulled through with flying colors. Unfortunately, soon after surgery Roman suffered a severe cardiac arrest, which in turn caused significant damage to his brain and kidneys. Roman fought fiercely for the next six days, but his young body was too weary to go on. On April 8, 2022, held in his mother’s arms and with his father by his side, Roman slipped away and found peace.

Although Roman’s time on this earth was short, there were many precious memories made…

Roman’s immediate calm when placed on his mother’s chest, his father changing Roman’s first diaper, the peace and contentment he found in his father’s arms when first held, turning his head the moment he heard his mommy’s voice, opening his eyes after surgery and watching every move his parents made, meeting his brother Elijah, squeezing his mother’s finger, daddy being the first to put his green hat on, tucking his hand in by his face when asleep just as he did in each ultrasound, the creative outfits his nurses made for him, holding his daddy’s hand, being soothed to sleep by his mommy one final time…

Indeed, the memories are abundant, joyous, and very much cherished.

A Service of Remembrance will honor his time on earth and with this family at 10 a.m. Saturday, April 23, at Trinity Lutheran Church, 502 N Fourth St, Bismarck.  Visitation will take place one hour prior to service. A service livestream will be available at www.trinitybismarck.com.