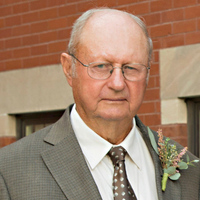 William “Bill” Trautmann passed away April 7, 2022, at a Bismarck hospital.

Funeral services will be held at 1 p.m. Monday, April 18 at Bethany Lutheran Church, Robinson. Visitation will be held one hour prior to the service.

Bill was born near Robinson on September 25, 1931, to William and Martha (Weisser) Trautmann. He was the oldest of three children. In August 1952, he married Judith Hanson. Judy passed away in 2008. Together they had three children, Myra, Kelly and Clyde.

Bill grew up on the family farm and graduated from Robinson High School in 1949. He played basketball and was a member of a class C state championship team. After graduation, he worked at the Melville elevator and taught school for a short time. Eventually, he was employed by Security State Bank (Wells Agency) in Robinson and spent the next 39 years working there.

He had many interests and hobbies. As a young man he enjoyed hunting, fishing, bowling and playing softball. He became a skilled woodworker and always had a love for music and playing his accordion. He was a band member of JP Munch and His Bunch and played for many dances in the area. He was also a member of the Robinson Quartet.

Bill enjoyed spending time on the family ranch where he and son, Clyde, took on the challenges of raising cattle. He worked hard and was proud when the calves looked nice in the sales barn come selling time.

Golfing became his passion and he enjoyed competing in golf events with his son, Kelly. He was an excellent putter and he could hit the ball a long ways, sometimes not so straight.

He loved to eat and always had one eye watching his driveway, hoping to see his daughter Myra coming, which always meant cookies, bars, pies and other delicious goodies.

Bill was a loyal fan of the Minnesota Twins and never missed a game. When his grandson Morgan would visit they often talked baseball. He liked Westerns — Gunsmoke and Bonanza being his favorites.

Granddaughter Marin blessed Bill with three great-grandchildren. The twin boys, Eddie and Vinny, loved to shoot gophers with great-grandpa. Maybe I should say shoot at gophers. Little Millie came along just in time to take some great pictures with her great-grandpa.

Bill was a church and school board member and served on various other Robinson community committees. He belonged to both the Lions and Eagles Club.

He especially liked meeting his friends each morning for coffee at Carol’s Kitchen. After his illness, he worked hard with his therapists so that he could once again join his buddies.

He was preceded in death by his parents; wife, Judy; son-in-law, Allen; sister-in-law Velma; and brother-in-law, Glen.