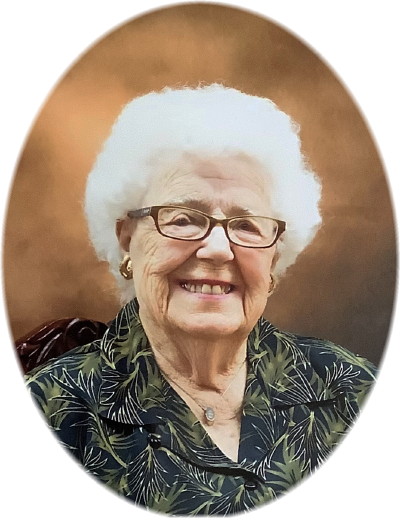 Evelyn Brovold, 96, New England, died on Friday, April 8, 2022 at St. Luke’s Home, Dickinson. Evelyn’s Funeral Service will be at 2 p.m., Tuesday, April 19, 2022 at Our Redeemer’s Lutheran Church, New England with Rev. Elizabeth Parks officiating. Interment will take place at Our Redeemer’s Lutheran Cemetery, New England. Visitation will be on Monday from 4 p.m. to 7 p.m. at Ladbury Funeral Service, Dickinson. Visitation will be continue on Tuesday, one hour prior to the service at the church.

Evelyn Jerstad and her twin brother Floyd were born in Finley on March 21, 1926 to Ole and Edna (Yost) Jerstad. Evelyn liked to tell the story that the doctor brought a baby out of the bedroom, handed it to her father, and said, “Hold this one while I get the next one.” Then he came out and handed the father the next baby, saying “Hold this one while I go get the next one.” We do not know what her father’s reaction to that joking remark was.

Evelyn grew up on the farm in Finley with her four brothers and after World War II, she met Ralph Brovold, a young veteran from a neighboring small town, and they married in November 1948. They soon moved to New England, where they raised their two children, Camille and Jay, and stayed for the remainder of their lives.

Evelyn and Ralph were both very committed to participating in their community. Evelyn joined numerous community groups, among them the American Legion Auxiliary, for which she was the North Dakota State Chaplain for a number of years. Whenever something was messed up, Evelyn would say, “They must not have had a woman on the committee.” She did her part to remedy that, proudly serving as the Chair of the New England Centennial Committee in 1986 and spending a few years on the New England Zoning Board and participating in numerous other organizations. She was also active in the New England Golf Association and was the Secretary of the Women’s Bowling Association for over 50 years.

She loved to golf and bowl and dance. Camille and Jay have fond memories of Evelyn and Ralph putting “In the Mood” on the record player and dancing the jitterbug. Loving music, Evelyn would join any choir that was available. She found comfort and fellowship in Our Redeemer’s Lutheran Church. She was also a master seamstress.

The Brovold home was always full of newspapers and magazines and books, and Camille and Jay are eternally grateful for their parents’ example of having an interest in the wider world and a love of reading, which has brought both of them great joy throughout their lives.

While enjoying a long life of 96 years, Evelyn of course suffered many losses, including her husband, Ralph; her beloved grandson, Ryan Brovold; and son-in-law, LeRoy Moore. Also preceding her in death were all of her brothers and their spouses, as well as Ralph’s siblings and their spouses.