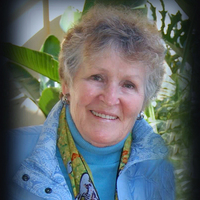 To view a livestream of the service, click here: www.firstlutheran.tv

Barbara was born April 9, 1933, in Minot to Manual and Elsie (Farnand) Dahl. She was raised and educated in Minot and graduated from Minot High School in 1951. She graduated from Trinity Hospital School of Nursing in 1954, and taught Nursing there for several years. Barbara married John Richard Samuelson on June 10, 1956, at Vincent Methodist Church in Minot.

John and Barbara moved to California, as John was commissioned in the Navy and assigned San Diego as a home port. They made their new home in Coronado, adjacent to the naval base and a 10-minute ferry ride from San Diego. Barbara worked as a registered nurse at Coronado Hospital from 1957 to 1960. Two sons, Paul and Johnny, were born to John and Barbara while living in California. The family returned to Minot in 1965 where John operated Samuelsons Shoes, and Barbara attended Minot State College and graduated in 1969 with a bachelor’s degree in Education.

From 1970 to 1995, Barbara taught in the Minot Public Schools as an elementary teacher. She spent a majority of her career as a 5th Grade Teacher at McKinley Elementary School, and loved teaching her students about history, geography, math, and science. She also taught several years at Washington Elementary School.

After retirement, John and Barbara traveled extensively throughout the United States. Barbara’s interest in U.S. history was the inspiration for traveling along the Lewis and Clark trail from the midwest to the west coast, and visiting Civil War battlefields and Presidential homes and Libraries in the eastern U.S. They also vacationed in Florida, Arizona, and California several years during winter months.

John and Barbara spent summers at their cabin on Lake Metigoshe, where they loved boating and spending time with friends and family, especially their two granddaughters, Hanna and Heidi. Barbara’s hobbies included word games such as Scrabble, studying family genealogy, reading books about historical figures and events, and watching PGA golf and NFL football.