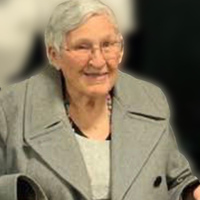 Valda L. Malard, 96, Hazelton, died peacefully at the home of her daughter.

A Mass of Christian burial will be held at 1:00 p.m. on Saturday, March 26 at Saint Paul Catholic Church, Hazelton. Visitation will be held from 5:00 to 7:00 p.m. on Friday, March 25 with a prayer service and rosary starting at 7:00 p.m. at Parkway Funeral Service, 2330 Tyler Parkway, Bismarck. Visitation will continue one hour prior to Mass. Service livestream can be viewed on the Parkway Funeral Service website.

She was born in Wing, the eighth child of Alvin and Cora (Tolliver) Wheeler, on June 15th, 1925. She moved to Bismarck at a young age and lived with her father and siblings as her mother died when Valda was nine years old. She attended Richolt School and Bismarck High School. She started working outside the home at 15 at the Bismarck Hospital in the central supply area, then traveled to Washington State where she lived with her brother, Art and worked in the strawberry fields.

Returning to Bismarck at the age of 17, she began working at a dry-cleaning shop a fellow employee introduced Valda to her brother, Edwin Malard and it was love at first site. Edwin and Valda were married at St. Mary’s church in Bismarck on September 8, 1945. They moved on to his parent’s farm, at which time they built their little house across the road from his parents. They were blessed with three children: Carol Herauf, (deceased), Deborah Larson, Bismarck and James, Hazelton. She loved to work in her garden, and you would find her in the garden early morning and late evening making sure that there were no weeds, and her plants were receiving the moisture they needed. In the late summer and fall you would find her busy canning her produce and butchering chickens, she also raised turkeys for several years and enjoyed telling friends some funny stories regarding the education she learned about turkeys. She was an excellent seamstress and sewed clothes for her children, grandchildren, friends and neighbors, refinished furniture and reupholstered furniture and sold Avon and Stanley products; Mom was never idle for very long.

In 1963, Ed and Valda purchased a farm in the Moffit/Hazelton area, she found herself with two gardens to tend making sure that they were close to a source of water, and she would no longer have to pack water to the garden. She never had much time to watch TV, but always had a radio on listening to her favorite country western and old gospel music. She knew the words to every song and her children enjoyed listening to her beautiful voice.

Valda and Ed enjoyed camping with their neighbors, and she said many mornings they would wake up with frost and sometimes light snow on their tent as they made sure the fall work was done before they could begin their travels to South Dakota, Montana, Idaho and Washington.

Sundays were very important to her, beginning with Mass at St. Paul’s Catholic church in Hazelton, then serving a Sunday meal of roast beef, mashed potatoes, gravy, corn and always her wonderful homemade buns, and pies. The menu never varied. Her children and grandchildren would join them often, she would always make certain that there were cookies in the cookie jar. Valda became an avid reader of Harlequin romance novels as she grew older and would finish a book a day. She would visit the Bismarck Library every two weeks and would pick 12 books (non-Harlequin) always with a western theme.

Western shows and movies were the shows of choice, which she watched up until four days before she went home to the Lord. Tom Selleck and Sam Elliot were her heroes.

In 2017, Valda and Ed moved to Bismarck to live with their daughter Deborah, again telling her daughter how to plant a garden and flowers, and occasionally how to cook.