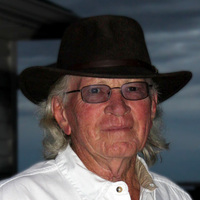 Clyde was born March 1, 1940, to H Lloyd and Elsie (House) McLean. He was raised on a farm south of Menoken, attended Boyd School and graduated from Bismarck High School. He served in the North Dakota National Guard from 1964-1967. Clyde was a designer/builder by trade and was a meticulous carpenter. He also owned a backhoe business. He loved building and flying model airplanes. He also loved raising animals; some of which were Border Collies, rabbits, chinchillas, sheep, a raccoon, and a turtle. He really enjoyed gardening plants and flowers.

Clyde married Marjorie Welch in 1964 in Bismarck where they lived and had two children, Garrett and Audree. They divorced and Clyde later married Karen Holzer (Hertz), with her two daughters, Dawn Brorby and Lori Hillestad. They then had Justin (Red) McLean in 1977. They resided in Williston and Minot until they divorced.

He was preceded in death by his parents; son, Justin McLean; sisters, Kathleen Schmitke and Laurel Larsen; brothers, Jonathon and Loren McLean and brothers-in-law, Willard Larsen and Gordon Knutson.