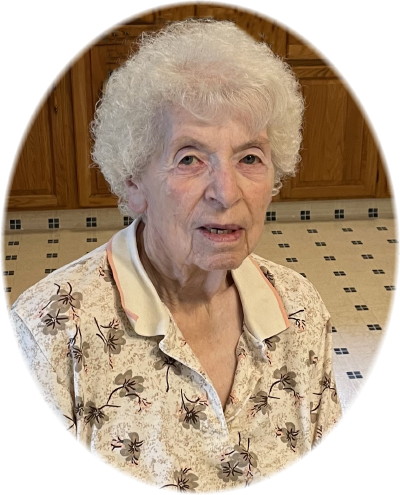 Gertrude “Gertie” Mayer, 92, Dickinson, died Thursday, March 24, 2022 surrounded by her family at CHI St. Alexius, Dickinson. Gertie’s Funeral Service will be at 10:30 a.m., Wednesday, March 30, 2022 at St. John Evangelical Lutheran Church, Dickinson, with Rev. Lisa Lewton officiating. Interment will follow at the Dickinson Cemetery. Visitation will be on Tuesday from 3 p.m. to 5 p.m., at Ladbury Funeral Service, Dickinson, and will continue one hour prior to the service on Wednesday at the church.

Gertrude Sailer was born January 19, 1930 in Hebron, the daughter of Karl and Emma (Hilgeman) Sailer. She was raised and educated in Hebron where she also graduated from high school.

Gertie was united in marriage to Reinhold “Reiny” Mayer, Jr. on July 9, 1950 in Hebron. She worked as a bookkeeper throughout her life. Working for Walters Garage, Hebron, and following their move to Dickinson, she was at Red Owl, Farmers Union, Consolidated Telephone, Stark Motors, and the last 23 years spent at Sax Motors where she retired in 1992.

She enjoyed gardening, canning, yardwork, hosting parties, and traveling with Reiny to his dance jobs.

She was preceded in death by her parents, Karl Sailer and Emma Senne; her brothers and other family members.