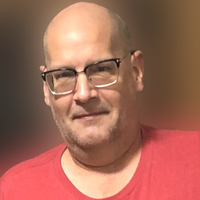 Nathan was born on March 28, 1970, in Denver, CO to David and Linda (Larson) Jacobson. At the age of four, he moved with his family back to North Dakota where he was raised on the Jacobson family farm in the South Prairie area, where he also completed his elementary education. He was a graduate of the Minot High School, class of 1988, where he discovered a love for debate which led to him polishing his “discussion” skills that he incorporated often in the following years.

Immediately after graduation, Nathan began his endeavor in the U.S. Military, gaining an education from the Presidio in Monterey, CA before his assignment to a US Army installation in Germany where he served as a linguist within the military intelligence community. Even though he did not continue with the Army, he never lost fluency in the German language, continuously reading books in his second language over the next thirty years.

Nathan held various jobs from dealing blackjack to working in construction as a laborer. It was in his most recent years he found his niche, perfecting several trade skills he made available to anyone who asked in their need of service. These were his most memorable years, often working alongside his dad which created a special bond between them during their countless hours together, including many out-of-town jobs where they discovered a mutual love of John Prine music. He worked a number of years in Makoti, ND working as a partsman at Rensch Garage alongside his mentor Bobby Joe. He also dabbled as a bartender at the K-bar where he was able to flex his use of words with anyone willing to talk and/or listen.

Nathan discovered a love for fishing, frequenting the local lakes whether alone or alongside his uncle Micheal who he shared many conversations with as they caught their limits together. In addition, Nathan enjoyed cooking, gardening, golfing, horseracing and trivia. He was a loyal fan of the Denver Broncos, Colorado Avalanche, Bison football, UND hockey and Boston Red Sox.

Nathan truly was a unique individual, composed of several traits and talents that always left an impression on anyone he met. His heart was full of love for his family and he always expressed his love at the end of every conversation or visit with them.

Nathan is survived by his parents David and Linda Jacobson, brother Colin and sister Kara, all of Minot and several aunts, uncles and cousins.

Cremation arrangements are in the care of Thomas Family Funeral Home, Minot.