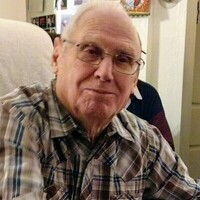 Bennie Burgard, 84, passed away on May 17, 2021. Mass of Christian Burial will be held 1 p.m., Wednesday, May 26 at Cathedral of the Holy Spirit, 519 Raymond St., Bismarck. A service livestream will be available at the link: https://venue.streamspot.com/event/MjY3MDA4NA==

Visitation will be held from 5 to 7 p.m. with a vigil/rosary service starting at 7 p.m. on Tuesday, May 25 at Parkway Funeral Service, 2330 Tyler Parkway, Bismarck.

Bennie Burgard was born on March 27, 1937 in Orrin, ND. He attended school in Orrin.

He married Darlene Rohrich on September 10, 1960 and together they had five children.

In 1970, he went to work for Burlington Northern Railroad and remained with them until his retirement.

He was preceded in death by two daughters, Marilyn Koch and Sheri Burgard; parents, Benard and Teresia Burgard; brothers, John and Christ Burgard and sisters, Theresa, Marion and Angie.