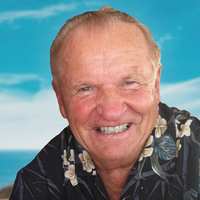 Jim was born to Elizabeth and Victor Movchan in Butte, North Dakota on August 23rd, 1931, and went home to be with our Heavenly Father on March 24th, 2022.

Jim grew up in Butte, ND where he attended grade school.  He later moved to Minot and graduated from high school in Minot, where he resided the rest of his life.  Jim leaves behind two daughters, Teri (Dennis) Boyland from Pahrump, NV and Shelley (Marvin) Smith from Las Vegas, NV/Kennebunk, ME as well as his sister, Agnus Fuller from Tarpon Springs, FL.

Jim was a veteran and proudly served his country in the army where he was stationed in France and England. Jim was also an accomplished private commercial pilot.  He was one of the top salespeople in automotive parts and supplies and extensively traveled the state of North Dakota.  Jim loved the outdoors and was an avid fisherman, hunter, and gardener.  He had a reputation for having a “green thumb” and always had the most beautiful yard, flowers, and gardens.  He was also an amazing cook, and his specialty was delectable desserts! His motto was “I would rather wear-out than rust-out,” this motto served him well as he was very active into his 90s.  Jim remembered a million jokes and was always the life of the party. His family believes that he will keep God well entertained with his great sense of humor for eternity.   He was loved by all!

A celebration of life service will be held in the Spring. For more details & updates, please visit JamesMovchan.com
To reach the family immediately please email [email protected]