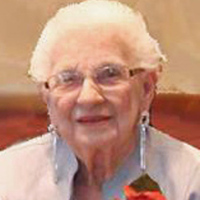 Services will be held at 11:00 a.m. Saturday, March 26, at English Lutheran Church, Tuttle, with Rev. Trish DeBoer officiating. Burial will be at the Tuttle Cemetery.

Visitation will be held from 5 to 7:00 p.m. Friday, March 25 at Eastgate Funeral Service, 2302 E Divide Avenue, Bismarck and will continue one hour prior to the service at the church.

Esther was born June 2, 1931 in Tuttle, ND, the daughter of George and Lydia (Lang) Munsch. She grew up on the family farm and attended Tuttle Public School. Esther married Willie Leno on March 3, 1949, in Steele and the couple farmed northwest of Tuttle. In 1974, they moved into Tuttle where Esther painted houses and worked as a cook in the Tuttle café and the Tuttle Public School. In 1993, Esther and Willie moved to Bismarck and in October 2020 she moved to Menoken. After falling and breaking her hip, she moved into Augusta Place in August 2021 and resided there until she passed away.

Esther enjoyed baking, cooking, listening to music, and going to the casino. She especially enjoyed spending time with her grandchildren and great-grandchildren. She also enjoyed visits from her nieces and nephews. She loved visiting with company and whether you were hungry or not, you were always offered food when you stopped by.

She was preceded in death by her husband; her parents; her brothers, George Jr., J. P. “Johnny”, Edwin, Reuben, Donald; and her sisters, Alice Hahn, Margaret Munsch, Anna Fandrich.

The family would like to thank the staff of Augusta Place for their superior care during Esther’s stay.