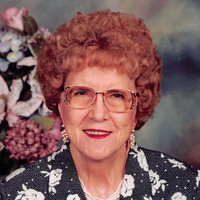 Funeral services will be held at 11 a.m. on Friday, March 11 at Parkway Funeral Service, 233. Tyler Parkway, Bismarck.  Visitation will be one hour prior to the service.  Burial will take place at Sunset Memorial Gardens, Bismarck.

Violet LaVerne was born on July 22, 1926, in Almont, ND to Andrew and Carrie Gray.  She was the second oldest of six children in the family.  She attended school in Hebron and the family lived in several towns in North Dakota and Montana, moving with her father’s job with the railroad. 1939 was the start of World War II and in the early 1940’s, at the young age of 15, LaVerne went to work at the defense plants in Minnesota and Iowa.

In 1945, she married Arnold Jaeger and they made their home in Bismarck. They were blessed with two children, Lance and Lauren. For several years, LaVerne worked at the Red Owl Bakery, but her main job was taking care of her family. Arnold passed away in 1986. She continued to live in Bismarck and winter in Mesa, AZ where her and Arnold would spend their last winters together.

LaVerne enjoyed playing the organ, spending time with friends and her winters in Arizona, where she learned and fell in love with Ballroom Dancing.

She was preceded in death by her husbands, Arnold Jaeger and Harry Falconer; parents, Andrew and Carrie Gray; four brothers and one sister.