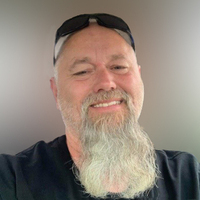 To view a recorded version of Chad’s service access https://www.mtmsales.net/thomas

Chad was born April 11, 1973, in John Moses Hospital of the Minot AFB, ND.  Chad’s parents are Wayne and Lucy (Schwartzenberger) Tuttle of Minot.

Chad graduated from Bishop Ryan High School in 1991.  He traveled early in his working years as a construction worker.  When he returned to Minot, Chad found work in the oil fields.  He was sought by PeBen Corporation of Houston, TX to manage a new oil pipe storage/delivery yard (MTS) located south of Foxholm, ND which became his ultimate job. He loved his position and his employees.

Chad married Tammy Buechler in Minot 1993.  This marriage was blessed with three daughters, Brittney, Kayla and Brianna.  They made their home in Minot and later divorced.

Chad was proud to be a member of the Norseman Motorcycle Club.  His Norseman “brothers” meant the world to him, he truly enjoyed the brotherhood and was very active in the organization helping with charity rides and numerous fund raisers. Chad was avid dart thrower and pool player. He was active in numerous city and county leagues at which he became very proficient in both sports.

Chad had a special place in his heart for his granddaughter Zoey McKnight and his niece Brinley Tuttle both of Minot, his face lit up every time he saw them. A special friend of Chad’s was his dog Zoey, he loved her so!

Chad was preceded in death by his brother Brian Tuttle, and grandparents Kenneth and JoAnn Tuttle, Austin, MN and Ella and Joe Schwartzenberger, Minot, ND.

Interment:  Rosehill Memorial Park, Minot to be held later in 2022