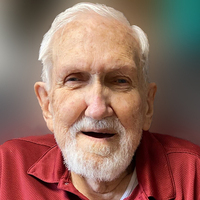 Clarence was born November 7, 1934 in Rollette County, ND, the son of Bert and Amanda (Stromme) Fred.  He was raised and educated in Willow City, ND.

Clarence was united in marriage to Darlene Cherie Borgen on November 25, 1953 in Willow City, ND.  They made their home in Minot, where he was employed for over 40 years at Jack Monument Company.  Clarence and Darlene had five children and numerous grandchildren.  Darlene was called to her eternal home on March 13, 1992.

Clarence was united in marriage to Delores Dahl Bryntesen on August 23, 1993 in Minot, ND.  She was called to her eternal home on November 26, 2012.

Clarence was an avid hunter and fisherman and enjoyed travel and visiting with his many dear friends over a cup of coffee and cookies and other sweets.

Clarence was preceded in death by his parents, wives Darlene and Delores, sons, Duane and Craig, grandson, Keegan Clarence Fred and brothers, Donnie and James.