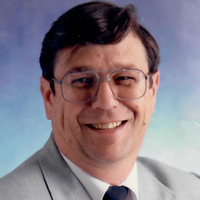 Denys was born October 4, 1933, in Belmont, Manitoba, Canada to Rev. William H. and Ellen (Clements) Powell. He spent the first decade of his life in Canada, moving with his family in 1945 to United States, settling in the community of Williston, North Dakota. Denys worked for local newspapers during his youth and graduated from Williston High School in 1952.

Denys was united in marriage to Betty J. Monson on August 8, 1954, in Williston. They moved to Minot in 1956 and he went to work for the Minot Daily News as a printer.  During this time, he held a number of offices in the Typographical Union, Minot Central Labor Union, and the ND AFL-CIO.

In 1973 he found his calling, working as a sales representative in the wholesale hardware business.  First for Farwell, Ozmun, Kirk and Company and then joining United Hardware of Plymouth, MN.  Denys made many lifelong friends servicing all of Western North Dakota during his tenure until retiring in 1994.  Upon retirement, Denys and Betty spent a few years traveling full-time in their motor home before settling down in their new home at Siesta Retirement Village in Weslaco, TX.

Denys was a member of the Elks, Eagles, and Family Motor Coach Association.  He enjoyed woodworking, traveling, and socializing.  He will be remembered for his “gift of gab“ and ability to make new friends.

Denys was preceded in death by his parents, son-in-law Jesse Horgeshimer and brothers Harry and Stewart Powell.

Funeral Service:  10:30 a.m. Wednesday, March 16, 2022 at All Saints Episcopal Church, Minot.
Interment:  Rosehill Memorial Park, Minot.
Visitation will be held one hour prior to the start of the service in the church.
Memorials are preferred to Siesta Village Memorial Fund, 2712 S. International Blvd, Weslaco, TX 78596 or the Parkinson’s Foundation.