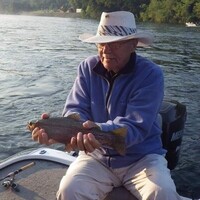 Leonhard was born December 5, 1938, to Fred and Magdalina (Schauer) Kemmet in North Dakota. He was raised and educated in Dawson, graduating from Dawson High School. He entered the U.S. Army until his honorable discharge. At age 18, Lenny wrote a song called “A Rose and A Baby Ruth” which he sold for $500 to a station in Minneapolis, which later became a hit by George Hamilton. He lived in California before returning to North Dakota. In 1979 he married Arlys Goldie Becker and the two resided in North Dakota

Throughout his life, Lenny wore many hats. He owned the Yankee Doodle Diner in Dawson and also worked various positions as a realtor, lineman, business operator and a personal air pilot. He wrote a The Ballad of JFK, which was read nationally at a JFK memorial. If those careers weren’t enough to keep him busy, he was also a published author and traveled with his wife as a singer in a traveling Hee-Haw Show. Lenny played Grandpa Jones and Arlys as Minnie Pearl. Both Arlys and Lenny enjoyed singing gospel and old western music. In 2019 Arlys passed away.

Lenny was a proud member of the American Legion of Dawson. He also enjoyed trips to the casino and loved spending time with animals.

In lieu of flowers, donations may be made to the animal charity of the donor’s choice in Lenny’s honor.

He was preceded in death by his wife, Arlys; son, Bruce Nagel; daughter-in-law, Sharon Nagel; his parents; and three brothers.