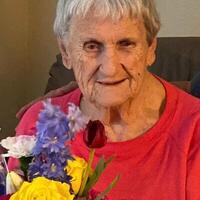 A family and friends gathering service will be held on Friday, February 11, 2022, from 4 to 6 pm at Thompson Funeral Home in Garrison.

Shirley Joan Zieman was born August 26, 1933, to Donovan and Blanche Thompson in Maxbass, North Dakota.  She died February 7, 2022, at her home in Garrison, North Dakota.

Shirley attended school in Maxbass and graduated in 1952.  After graduating from High School she attended Minot State College.

Shirley, along with many other College girls, went to see off the young draftee’s as the

trains pulled out from the Station.  One of the young men would become her husband.

She married Jim Sanders in Sept. 1953.  To this union 2 daughters were born – Joani and Jane Sanders.

While working on Harrington’s West Ranch during the flood of 1955, Jim lost his life while crossing the flooded bottoms on horseback on June 5, 1955.  Shirley and her 2 daughters lived with her parents for 3 years.

Robert Zieman, an Army buddy of Jim Sanders, went to visit Shirley and the girls.

Robert and Shirley were married on April 13, 1958.  They started their life together on the farm south of Plaza ND for the next 62 years.

Robert adopted the 2 young girls, and they had 5 more children

Shirley enjoyed helping on the farm, raising her children and farm animals through thick and thin for many years.

She was very sociable and liked to visit.  She had many friends near and far.  She was known for her homemade buns and caramel rolls, which she would take and share with Residents of Rockview Samaritan Center and various neighbors.

She is preceded in death by her parents, her brothers Dale and Veryl (Bud) and her first husband Jim.

Shirley and Robert attended a Patsy Cline concert in 1959 with their neighbors, Mary Ann and Wilmer Schenfisch.  At Shirley’s request, she asked that the song “Send me the Pillow That You Dream On” by Patsy, be played at her service in memory of their honeymoon in the Badlands and Medora in 1958. Her final wish was to have her service at St. Paul’s Church and be buried in the family plot at St. Paul’s.

“Blessed be her Memory Among Us”