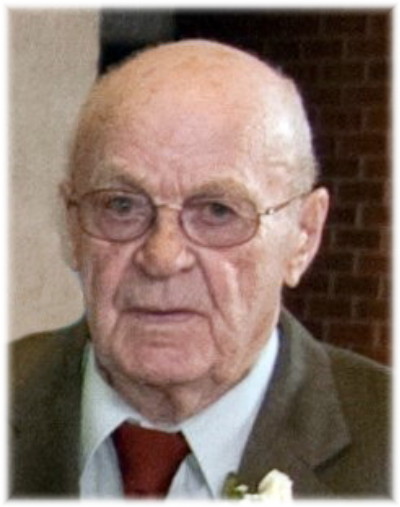 MSGT Raphael “Ray” Robert Amann, USAF (Retired), 95, formerly of Richardton, passed away peacefully on January 23, 2022, at Bethany on 42nd Senior Retirement Center in Fargo. Mass of Christian burial will be held at 9:30 a.m. (MT), Thursday, February 3, 2022, at St. Mary’s Catholic Church, Richardton, with the Father Thomas Wordekemper, OSB as the celebrant. Interment will take place at the North Dakota Veterans Cemetery, Mandan. Visitation will be at 8:30 a.m. (MT) before the service at the church.

Ray was born January 19, 1927, to Ray and Adelena (Schaaf) Amann in Wolf Point, MT. Shortly thereafter, the family moved to Richardton, where they resumed farming. He attended school at the Assumption Abbey. In 1949, he joined the United States Air Force, receiving an Honorable Discharge in 1952. Returning to Richardton, he worked on his father’s farm and Mischel Lumber Company. He married Dolores Mischel on June 3, 1953 at St. Mary’s Church. They had a son, Duane in 1954 followed by a daughter, Delrae in 1955. They were married for fifty-nine years.

Ray re-listed in the USAF in 1956 and was Honorably Discharged in 1972. In his amazing military career, he accumulated over 15,000 hours of flying time, which took him to all four corners of the world.  Some of his tours of duty included The Cuban Missile Crisis, The Congo uprising, various conflicts on the Korean Peninsula, the Six Day War in the Middle East, Southeast Asia (including Vietnam, Cambodia, Thailand, Laos). Other destinations were those where the United States made security and military commitments including Pakistan, Afghanistan, Russia, China, and the Philippines to name a few. In the final years of his military career, he served as part of an elite flight crew under the command of General Jack Catton, Commander of the Military Airlift Command during that time.

In 1972, after retiring from the military, he and his wife, Dolores purchased Mischel Lumber Company. They were the fourth generation of “Mischel’s” to own the business. During their years in Richardton, Ray and Dolores were active in the community and made many lifelong friends. He was proud of his membership in the Theodore R. Zech Post 180. Completing their final step in retirement, they sold the business in 1987. Purchasing a motorhome, provided them the opportunity of traveling and discovering new areas of interest and reuniting with many friends they made during Ray’s military service. Retirement also allowed them more time to see their children and grandchildren. He enjoyed playing cards, fishing, working on his vehicles, maintaining his house and yard and visiting with friends and relatives.

After selling their home in Richardton, Ray joined Dolores in Fargo in 2009, where they resided at Riverview Retirement Center. Declining health saw both entering Villa Maria Nursing Home. After his wife’s passing in 2012, he moved to Bethany on 42 Retirement Center where he resided until his death. He enjoyed spending long weekends with his daughter and her husband at the lake in Detroit Lakes, MN. He was able to enjoy being close to his family. Most of all, he loved his red scooter and the freedom it gave him.

He was preceded in death by his wife; parents; father & mother-in-law, Sabastian “Sabbie” & Odessa Mischel; one brother & sister-in-law, Charles & Jan Mischel; niece, Melissa Mischel Leingang & her son Caden; and many other relatives.

Ray made many friends in life. He looked forward to visitors, especially those who had news to share about Richardton. A special thank you to Todd Hively, Kindred, for many years of friendship and support. Memorials should be directed to St. Mary’s Catholic Church, Richardton, attention Father Thomas. May you rest in peace.