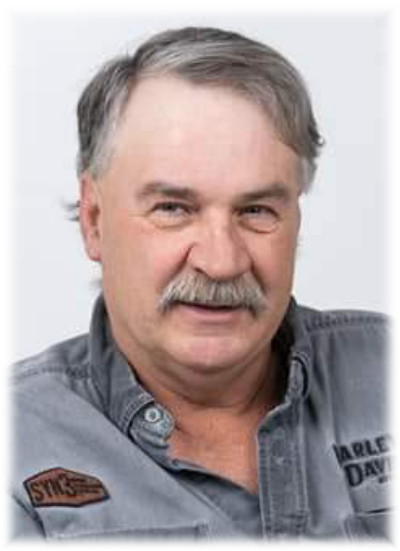 Rodney Aman, 62, Mandan, died on Friday, January 28, 2022 at Sanford Health, Bismarck. Rodney’s Mass of Christian Burial will be at 9:30 a.m., Tuesday, February 1, 2022 at St. Mary’s Catholic Church, Richardton with Fr. Thomas Wordekemper, OSB as celebrant. Interment will follow at St. Mary’s Cemetery. Visitation will be on Monday from 4 p.m. to 6 p.m., with a Rosary & Vigil at 6 p.m., at Ladbury Funeral Service, Dickinson, with Deacon Robert Bohn presiding. Visitation will continue one hour prior to the service on Tuesday.

Rodney Joseph Aman was born October 6, 1959 in Bowman, the son of Leo and Betty (Gaab) Aman. The family moved to Mott where he began his education, and as a fourth grader the family moved to Richardton where he completed his education, graduating from Richardton High School in 1978. Rodney was the third of five sons, holding the honor of being the most mischievous, yet having an entrepreneurial mind and having a reputation for making money from whatever crossed his path. Once selling hides following a brutal snowstorm, he made enough money to fund a road trip to Mexico.

Following high school Rodney began working for Borns Meat Market in Richardton where his passion for butchering and processing meat began.  He passed this passion onto his brothers and nephews. In 1980 he began a 40 year career in the oil field, and over the years had become known as “The Legend”. He had a way of taking inexperienced employees under his wing and molding them into the people and workers they are today. He was highly respected and dedicated to his work.

Rodney was united in marriage to Teresa (Conn) Aman on April 8, 1983 and to this union raised two daughters, Tanya and Tiffany in Richardton, ND. His daughters were his pride and joy. He instilled into them the importance of hard work and family and was the pillar of their support system. Seven years ago, Rodney moved to Mandan where he fulfilled his dream of starting an antique business called Prairie Pickens. He loved to give family and friends a tour and no one left empty handed Rodney’s motto was ‘One man’s junk is another man’s treasure’.

Rodney served for 30 years on the Richardton Volunteer Fire Department, with 25 years as the Chief. During his time as Fire Chief, Rodney initiated the fire safety program at the local Richardton Elementary School and spearheaded escorts for local soldiers returning home from deployments. He loved people and dedicated his life to helping others, being the first one on the scene to comfort or assist others in their times of need. Rodney enjoyed playing poker, attending tournaments throughout the state, butchering, riding his Harley, working at South Side Salvage, antiquing, card games, spending time with family especially his grandsons. Some of his favorite things to do with his grandsons were to attend local rodeos, feed the squirrels, and show them his ‘goodies’ from his Prairie Pickens. Rodney always lit up whenever his ‘boys’ were in his presence. When Rodney met Corey, Tiffany’s fiancé, he gave his approval immediately and together they bonded over Rodney’s ‘antique’ collection.

He was recently preceded in death by his sister-in-law, Sheri Aman.