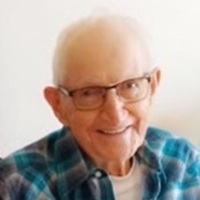 Patrick McKinzie, 84, Ryder and Rolette, died on Saturday, January 29, 2022, at the Garrison Hospital. Funeral services will be held on Thursday, February 3, 2022, at 2:00 pm at St. Nicholas Catholic Church in Garrison. Burial will be held at 4:30 pm at the Rosehill Cemetery in Ryder.

Visitation will be held on Thursday from Noon until the time of services at the church.

Pat was born May 3, 1937, on the family farm south of Ryder, ND, the son of the late Ossie and Ellen (Kelly) McKinzie. He was raised on the family farm and attended school in Ryder, graduating from Ryder High School in the Class of 1955. Pat married Frances Johnson, from Ryder, on March 31, 1959, and they resided in a trailer home on the farm of Pat’s mother until 1961. They then moved to the Sever Romsaas farm where they farmed until 1964. In the fall of 1964, they moved to Ryder and Pat was employed by the State Highway Dept. and continued farming in Blue Hill Township. In 1978, Pat became the Head Maintenance Engineer at the North Shore Elementary School, where he was employed for 23 years. Pat and Frances were proud lifelong farmers! Frances died in 1999 and Pat retired shortly after her death in 2001.

Pat married Joyce Best Rocheleau on September 21, 2001. They lived on their farm near Rolette, ND where they enjoyed their retirement.  Pat spent a lot of time working in the yards in both Rolette and back in Ryder. He was very proud of his yards, flowers and garden.

Pat had a number of hobbies beside taking care of his yards. He enjoyed building and flying remote controlled airplanes. He also loved to ice fish, hunting, leather craft and visit with neighbors. On Sunday’s he could be found in front of the TV watching the Vikings. While working on his house projects and tinkering in the garage, he liked to listen to KCJB 910 on the radio.  Pat loved the radio, he even learned how to use Alexa!

To view a livestream or recorded version of the service go to www.facebook.com/garrisonthompsonfh/