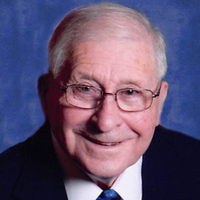 Edmer “Eddy” Murschel, 89, Bismarck, passed away on Thursday, January 20, 2022 at Marian Manor, Glen Ullin, ND. Funeral will be on Saturday, January 22, 2022, at 3:00 pm at Parkway Funeral Service,2330 Tyler Parkway, Bismarck, with visitation starting one hour prior to the service. The service will be live streamed on this website. Burial will take place in the Veterans Section of Sunset Cemetery with military honors.

Edmer was born on April 1, 1932, to Henry and Emma (Kessler) Murschel in Zap, ND. He was raised and educated in Zap and then became a certified mechanic at the North Dakota State School of Science in Wahpeton. On December 26, 1950, Eddy joined the United States Army and proudly served his country. He did not talk much about his time spent in the service until later in life, when he shared pieces with his family as they were some stories he did not want forgotten or to go unknown. He was one of only 200 soldiers that walked in on ground zero during the testing of an atom bomb, which the high exposure of radiation caused him to have Waldenstrom Disease, a very rare form of cancer. He was honorably discharged on December 13, 1953 and he returned to North Dakota.

On November 22, 1954, he married Angeline Ell of Linton at St. Mary’s Church, Bismarck. They made their home in Bismarck and Eddy went to work for Bismarck Boiler Company, which took him to Grafton to work and soon after, they moved to Elgin where he worked as a mechanic at the Ford Dealership. It wasn’t long before they moved back to Bismarck and he worked as a mechanic for Davis Chevrolet, which later became Tierney Chevrolet. Due to a back injury, he took a break from being a mechanic and worked in sales with Tierney, before starting Eddy’s Small Engines shop in the early 1980’s. Eddy was an entrepreneur at heart and even while being a full-time salesman, he also owned Kids Klothes, a clothing store in Northbrook Mall. Eddy took an early retirement in 1994 at age 62 and sold his small engine repair shop.

Retirement brought the purchase of a motor home, which took them to Arizona for many winters. Eddy and Angie loved to dance and would often attend dance jamborees, dancing from sun-up to sun-down. He was a member of the Bismarck AmVets, Eagles Club and St. Mary’s Catholic Church. Eddy had a witty sense of humor and loved to joke, which was appropriate for this April fools’ baby. He loved his family and his furry family too, including his dogs, Missy and Toby.