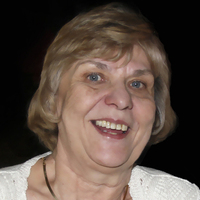 A livestream of the prayer service and funeral mass will be available by accessing https://www.mtmsales.net/thomas

Charlotte Ross, 77, Minot, died on Thursday, January 20, 2022 in her home following a courageous 12 year battle with a long term illness.

Charlotte Ann was born on April 5, 1944 in Minot, to Cyril and Marie (Schmidt) Kluck. She was raised in Minot and graduated from Bishop Ryan High School in 1962. As a young adult  she was employed as a telephone operator for Bell Telephone.

Charlotte married John Ross on Jan 30, 1965 at Our Lady of Grace Catholic Church in Minot. They made their home in Minneapolis for two years before returning to Minot where she was a fulltime wife, mother and homemaker until her children were grown. Then, she co-owned and operated Kluck’s Produce and Char’s Fashions for several years until she retired in 2002 due to health problems.

Charlotte was a member of Little Flower Catholic Church. She especially enjoyed bowling, crafting, crocheting and having fun.

Charlotte was preceded in death by her parents, siblings: Myrna Vogel, Sharon Smith and Wayne Kluck and nephews:  Kale Schaan and Alex Smith.

Mass of Christian Burial:  Friday, January 28, 2022 at 11:00 a.m. in Little Flower Catholic Church – Minot.  A livestream of the prayer service and funeral mass will be available by accessing https://www.mtmsales.net/thomas
Vigil Prayer Service:  Thursday at 7:00 p.m. in the church.
Visitation:  Thursday from 5:00 p.m. to 7:00 p.m. in the church.
Interment will be in Rosehill Memorial Park – Minot.