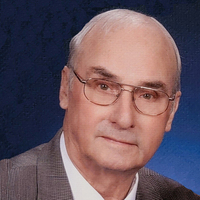 Visitation will be on Thursday, May 12, 2022 at Parkway Funeral Service, 2330 Tyler Parkway, Bismarck, from 5:00 pm until 6:30 pm, with a prayer service starting at 6:30 pm. Two days later, a memorial service will take place at 1:00 on Saturday, May 14, 2022 at Bethany Lutheran Church, Robinson, with burial to follow at Fairview Cemetery, Robinson.

Bill was born on December 2, 1929, to Lester and Aileen (Magee) White, the third of five children. He attended grade school in Buckeye Township and graduated from Steele High School.  Growing up, Bill had the opportunity to help in all aspects on the farm, which carved his path to becoming a third-generation farmer.

On January 5, 1952, he married Helen Stenberg in Bismarck.  They made their home together on the White family farm north of Tappen.  Farming was more than just a job to Bill, it was  a wonderful place to raise their three children. When Bill retired, he found a new hobby in woodworking. He made many sofa tables and Barn wood frames. In the Early 2000’s He and Helen moved to Bismarck where he continued this hobby for several years.

He was an active member of Bethany Lutheran Church, Robinson.  He was also a member of the Harvey Eagles Club and the Jamestown Elks Club. Not only was Bill a devoted farmer and family man, he played a significant role in the lives of his grandchildren.  He enjoyed being a grandfather to five and a great grandfather to three girls.