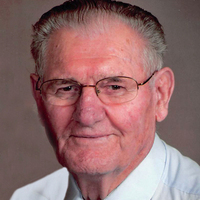 Raymond (Ray) Carl Adolf was born on March 2, 1934 in Hazen to Gustave and Erna Radke Adolf. He attended county school from grades 1-8. After school helped his dad farm. Ray was drafted in the fall of 1956 to the U.S. Army and stationed in Germany and France. He was a cook on a ship, which he did not enjoy. He was honorably discharged in the fall of 1958 and returned to the family farm to help his dad (and neighbors when needed).

Ray and Hertha Michelson held their marriage ceremony in Hazen on May 31, 1974. They settled in Bismarck where he worked constructing buildings and homes; first for Howard Miller, then for Capital City for 15+ years. He enjoyed and took great pride in his work.

Ray also enjoyed fishing, hunting, camping, playing cards with The Good Neighbors club and was a great dancer.  He and Hertha went on many bus tours, they went to the West Coast, to Brandon several times and even Alaska for their 25th Anniversary. Ray was a kind and likeable man. He was always willing to help anyone when needed and could fix almost anything. He was also active in church. He made a Baptismal Chest, with his cousin, handled some janitorial work and was an usher on many Sundays.

He is survived by the love of his life for 47 years, Hertha; two sisters, Marcella Knell and Darlene Miessel; brother, Leonard “Bill” (Esther) Adolf; nine nieces and nephews and a host of friends.

Ray was preceded in death by his parents and two brothers-in-law, Elmer Miessel and Alvin Knell.

He will be dearly missed.

Memorials may be sent to the Alzheimer’s Association, Faith Lutheran Church or to the charity of the donor’s choice.