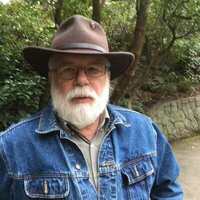 Visitation will be held from 9 to 11 a.m. Friday, Jan. 21 at Parkway Funeral Service, Bismarck.

Jim was born December 21,1948, to Dwight and Leona (Hall) Owen in Lemmon, South Dakota. He attended school in Lemmon, graduating from Lemmon High School with the class of 1967.  His favorite places to spend time as a youth were at his family’s Shadehill Lake cabin and the Hall Ranch.

Following graduation, Jim attended South Dakota State University in Brookings, S.D., for three years, before transferring to Iowa State University in 1970.  He proposed to his future wife by stating he didn’t want to spend every weekend on the road between Brookings and Ames, so they should probably get married.  Jim married Ellen Johnson on June 5, 1970, in Lemmon, S.D.  Soon after, Jim graduated from ISU with a degree in Landscape Architecture.  Following graduation from ISU Jim and Ellen returned to Lemmon, S.D., to await Jim’s letter of Greetings from Uncle Sam.  Jim enlisted in the US Army in 1972, spending the majority of time stationed at Ft. Riley, Kansas.  Their daughter, Brenda, was born in Manhattan, K.S., in 1974. Jim was honorably discharged in August 1975.

For the next few years Jim worked  for several nurseries in Casper, Wyoming, and Aberdeen, S.D.  Their daughter, Brooke, was born in Casper in 1977. The Owen family returned to Lemmon again in the 1980s where Jim worked for Lynn’s Super Valu, farmed, and raised livestock with his dad.  Following his dad’s death in 1982, Jim continued farming and started his own nursery, West River Landscaping.

Jim and his family moved to Bismarck in 1990.  He worked for Bismarck Parks and Recreation.  Jim returned to college at the University of Mary when he was 50 and received a degree in Computer Information Systems.  He then did IT work for Medcenter One (now Sanford Health) and worked for several construction companies doing drafting and building estimates.

Jim retired in 2013, spending time working with computers or planning his next road trip. Jim loved getting off the beaten path and finding new and interesting places to visit. Family was his priority and he always looked forward to spending time with his wife Ellen, his daughters, and grandchildren.