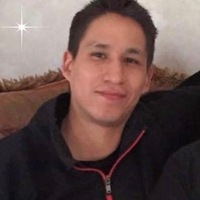 Visitation will be held on Tuesday from 2 to 4 pm at Thompson Funeral Home in Garrison.

Christopher James Finley was born October 7, 1985 in Stanley, ND to Daunelle Marsette and Val Finley Jr. Chris passed away January 7, 2022 at his home in Bismarck ND.

Chris (Fins) as he was called by his friends and family grew up in White Shield where he attended head start, elementary and high school and also attended part of his Junior year at New Town High School. Chris returned to White Shield for his Senior Year where he graduated with highest honors.

Chris also played Basketball in White Shield and NT from elementary through High School, and continued to play Basketball Leagues with his brothers Justin, Daniel, Jalen and his dad.

After Chris graduated, he attended one year of college at Lake Region in Devils Lake ND. He then went onto work several jobs throughout his life from Firefighting in Elko Nv, assembly line at Sioux Manufacturing, and was currently employed with MHA Nation Maintenance.

Chris enjoyed spending time with his daughter Sienna, nieces, nephews and family and friends. He also loved to joke and tease with friends and family and always had a smile.

Chris will forever be loved and missed by his family and all who knew him.