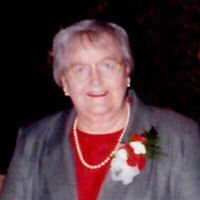 Esther Alice Engel, 90, Beulah, formerly of Garrison, died on Friday, January 7, 2022, at a Beulah  medical facility.  Memorial services will be held on Saturday, January 15, 2022, at 11:00 am at St. Paul Lutheran Church in Garrison.  Burial will be at the Garrison City Cemetery.

Esther Alice Engel was born January 4, 1932, in Coleharbor, ND to Otto and Lydia (Wessner) Metz.  She was raised and educated near Coleharbor.  Esther married Arthur Engel on August 16, 1953.  Following their marriage they stayed on the family farm northeast of Garrison, raising small grains and ranching.  Esther was a successful wife, mother, and rancher.

She was preceded in death by her husband, Arthur, parents, Lydia and Otto Metz, brothers, Lloyd and Curtis, sisters, Bernice (infant), Shirley and Darlene.

To view the livestream of the funeral, go to www.facebook.com/garrisonthompsonfh/