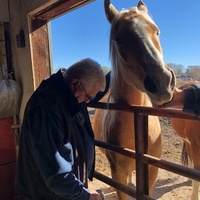 Visitation will be held from 5 to 7:00 p.m. with a Rosary/Vigil at 7:00 p.m. Tuesday, January 4, at Parkway Funeral Service, 2330 Tyler Pkwy, Bismarck and then again one hour prior to service.

He was born in Mercer County to Oscar and Elizabeth (Wehri) Hauser on July 20, 1935. Jack attended Haymarsh country school in his early years and graduated from Hebron High School in 1954 and went on to join the Marine Corp the following year. He served four years with the Marines, touring around the world in the process. He was honorably discharged after achieving the rank of Sergeant. When he returned from his service, he was employed by the North Dakota Stockmen Association from 1959-1963 as a Brand Inspector.

In August of 1962, Jack married Therisa Dunn in Dickey, North Dakota. Two years upon marriage, Jack and Therisa moved to Marshall, ND, where Jack became the foreman of the Schnell Ranch. Throughout his time serving as foreman at the ranch, Jack continued his passion caring for horses and cattle on the prairie.

In 1966, Jack and Therisa moved to Hebron, North Dakota, and purchased Hauser Insurance Agency where Jack later obtained his real estate license. During their time in Hebron, Jack was active in his community as Park Board Recorder, member of the Hebron Fire Department, Founder/Charter Member of the Hebron Historical Society, Chairman of the Hebron Centennial Committee, Chairman of Hebron North Dakota Centennial Project, Founder/President of the Hebron Community Economic Development Committee and was an active member of St. Ann’s Catholic Church in Hebron.  Along with his serving of the community, Jack received many awards such as the Jaycee’s Community Service Award, the Governor’s Leadership Award, and the North Dakota Leadership Award.

Jack will be remembered for his love of family, great conversations, and hosting family gatherings that often included many friendly games of Pinochle.