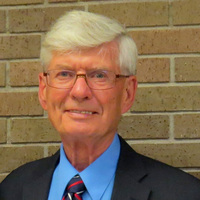 Funeral services will be held 11 am, Thursday, Dec. 23 at Bethel Lutheran Church, 615 East Turnpike Ave., Bismarck. The service will be livestreamed at www.facebook.com/bethelbismarck/live/

Christ is Risen. He is risen, Indeed! Alleluia!  God says, “There is a time to be born.”

August (Augie) Morris Schaeffer was born in Eureka, S.D. on May 14, 1935 to August and Blanche Schaeffer. August had one younger sister Jennifer, who preceded him in death.  Augie graduated from Linton High School in 1953 as the Valedictorian and Class President.  Fresh out of high school, he then served in the US Army in 1954 through 1956.  He is a graduate of University of North Dakota with a Master of Science in Education and an Administrator’s credential.

Jesus says, “Go and make disciples of all nations baptizing them in the name of the Father and of the Son and of the Holy Spirit.”  “Whoever confesses me before men, I will confess him before my Father in heaven.”

August was baptized in the death and resurrection of Jesus on August 11, 1935 in Artis, South Dakota.    He confessed his faith in Jesus through the Rite of Confirmation on May 15, 1963 at St. Paul Lutheran Church, in Driscoll, ND.  Augie was a charter member of Bethel Lutheran Church serving on several boards for many years.  Augie truly cherished the fellowship and time spent there.

God says, “It is not good for the man to live alone.  I will make a helper suitable for him.”

On July 22, 1962, Augie married Dianne Brandenburg in her hometown of Edgeley, ND at Zion Lutheran Church. His continuous love and devotion to his bride is reflected in their 59 years together, just shy of their 60th anniversary.  Two children were born from this union.  Mariah Dianne (March 17, 1965) and Darin August (May 22, 1970).  Augie and Dianne’s love continues to inspire their many friends and family.

“Whatever your hand finds to do, do it with all your might.”

For a large portion of his life, he was known for being an educator.  Augie began his educational career as a Math and Science teacher in Driscoll starting in 1962 until 1964.  His next stop was at Simile Middle School in Bismarck, ND teaching Science for fourteen years. He began his administrative career in 1977 at Century High School as the assistant principal for fourteen years, retiring in 1991.  Augie was inducted into Century’s Hall of Fame in 2013 and was honored with that recognition.  The numerous years spent in the educational profession allowed him to impact many lives along the way.  He was proud to be able to help people learn and prepare for their adult life.  Augie truly enjoyed serving the community in this way and loved hearing from his past students about how their lives turned out.

After a brief retirement from his thirty years in secondary education, he began a second career of seventeen years, working with the National Assessment of Educational Process (NAEP).  His work with NAEP involved traveling across the country evaluating various schools for the Department of Education.  Some of these trips to other parts of the country were very eye opening for him.  Some made him realize how very fortunate we are as North Dakotans to have such a sound educational system, a system he was a part of.  He took great pride in that.

Augie also served his community in other ways.  He served on the board for Pride, Inc., a nonprofit organization devoted to serving the developmentally disabled, for thirty years. As mentioned before, he was very active in his church serving on several boards throughout his lifetime. He also coordinated numerous blood drives for the United Blood Services for numerous years.  Augie was a lifelong believer of “Service to Your Community”.

In retirement and in between retirement jobs, Augie liked to travel with his bride.  Together they created many memories visiting dear friends and attractions. Medora Musicals to honor Veterans, buzzing around in their red convertible, home- church maintenance projects, rummage sales, weekly coffee groups, and a special “TGIF” group are just a few.

Their travels expanded through most of the United States including Hawaii and Alaska. Multiple visits were made to Los Angeles and Washington, D.C. which provided them with numerous opportunities for site seeing and entertainment. Augie and Dianne were also able to visit China and the Panama Canal.

August died on Wednesday, December 15, 2021 in Bismarck, at the age of 86 years, 7 months, and 1 day surrounded by his family and pastor.

August could best be described as an honorable and noble man of great integrity.  A man who sincerely always tried to do the right thing at every fork in the road, even if it wasn’t the easy path.  He was always willing to lend a hand or help out until his body no longer afforded him that option.  His love and kindness is an inspiration to his family and many who knew him.   He will be missed by them more than he could ever know.

Christ is risen! He is risen, indeed! Alleluia!