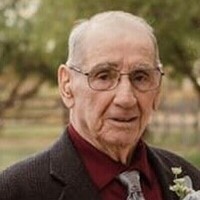 Visitation will be held from 5 to 7 p.m. Wednesday at Parkway Funeral Service, 2330 Tyler Pkwy, Bismarck. A rosary/vigil service will begin at 7 p.m.

Anton was born January 13, 1926, in Napoleon to Anton Sr. and Frances (Bitz) Piatz. He was the second oldest of 12 children. He attended country school through the eighth grade and later received his diploma. He stayed home to help on the family farm until he was drafted into the U.S. Army in 1945. Anton was stationed in Korea for two years.

He met his sweetheart, Agatha Welder, and they married October 25, 1948. Anton and Agatha farmed south of Napoleon until 1966 at which time they moved to Napoleon. Anton worked different jobs until he landed at Siewart’s Convenience Store. He worked there until 1976 when they moved to Bismarck. Anton started at Cenex in Bismarck in September 1976. He continued employment there until his retirement in 2016.

He was preceded in death by his wife, Agatha; daughter, Georgianna; two sons-in-law, Tony Gross and Junior Cruz; his parents, Anton and Frances Piatz; three sisters; and three brothers; and numerous brothers- and sisters-in-law.