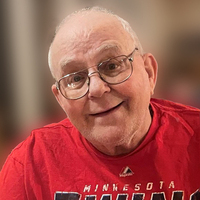 Terry (Po) Allen Stadick, 75, of Minot died on Tuesday, December 21, 2021 in his home following a courageous battle with prostate cancer.

Terry was born on October 23, 1946 in Minot to Walter and Betty Jane (McKinney) Stadick.

He was raised and educated in Minot and spent his youth playing basketball and baseball in the empty fields and courts around his Park Street neighborhood—often with his siblings and his other neighborhood friends. It was in high school, though, that he found something he truly loved and exceled at—wrestling, culminating in a second place state finish in 1963 in the 133 lb. weight class.

He graduated from Minot High School in 1964. He attended Minot State University for two years where he competed on an MSU Hall of Fame Wrestling Team. Terry served in the US army from 1969-1973. The majority of his service was in Thailand. Upon his honorable discharge from the service, he returned to Minot State University where he received his Bachelor of Science Degree in History with a secondary emphasis in education.

Terry was married to Shelly Boehmer from 1972 to 1994. Their union was blessed with three beautiful children –Betsy, Kelly and Dan. They made their home in Minot where Terry taught history and coached wrestling and other sports at Bishop Ryan High School. He was the ND High School Activities Association Wrestling Coach of the Year in 1978. Following his retirement from teaching and coaching he became a rural mail carrier for the U.S. Postal Service from 1996-2011 and served as a volunteer wrestling coach for Des Lacs-Burlington High School.

Terry met Val Tykeson Nies in 1998 and they were married on July 31, 2000. With the marriage came three wonderful stepchildren, Jessi, Jason and Brian. They made their home in South Prairie for many years where he indulged in another passion of his—gardening. He filled the ten acres with perennials, built a horseshoe pit and volleyball court for the family as well as a bocce ball court for when the in-laws came to visit. They lived there until his retirement in June of 2011 at which time they moved to Minot.

After his retirement Terry enjoyed his “fancy” coffee, jigsaw puzzles, visiting with grandkids and following their activities, Twins baseball, Bison football and a good meal. He also had a love of pets he has had over the years and in particular his dogs — Loretta, Brandy, Ralphie, Freckles, and Mariah.

In lieu of flowers, memorials are preferred to MSU Women’s Wrestling, Trinity Hospice, or Terry’s family asks that you plant a seed, wrestle a dog or put together a puzzle–All worthy pursuits and signs of a life well lived.