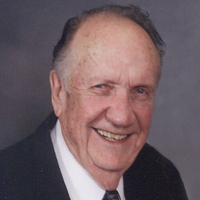 Ben was born June 14, 1927, in Minot, the son of Ben K. and Hannah (Espeseth) Tollefson. He attended Minot Public Schools until 1939, when he and his family moved to Washington. They returned to Minot in 1941, before the beginning of WWII. Ben joined the U.S. Navy in February of 1945 and graduated with his class in June of that year.

Immediately following boot camp, he was shipped out to Leyte Gulf in the Philippine Islands, where he was assigned to the U.S.S. Briareus, a repair ship. He served in the Philippines and Okinawa and then shipped to Shanghai, China, where he was assigned to a yard mine sweeper YMS245. He returned to the Philippines and swept mines off the coast of Borneo and the Island of Palawan. Later, he moved into the Naval Base of Subic Bay before being honorably discharged on June 12, 1946.

Ben attended Minot State University for two years and during the summer he worked for Nash Finch Company and later at the Minot Daily News as an advertising salesman.

Ben worked for Northern States Power Company for thirty-two years, spending four years as their sales manager. He received the “Citizen of the Year” award from NSP in 1956. He became Disaster Chairman of the 1969 Minot flood and received the “Red Cross Clara Barton Honor” award.

Ben was elected to the 38 District as Assistant Majority Leader in the House of Representatives and served for sixteen years. He then served eight years as State Senator in the North Dakota State Legislature. He received the “Recipient of the North Dakota Lignite Council Honor Award,” and also a “Meritorious Award from the North Dakota Power Use Council for 1979.”

World History and politics were his favorite topics to discuss with family and the ‘Know-It-Alls’ Breakfast Group. Ben was the family historian, who treasured his Norwegian heritage and a good piece of chocolate! He will be missed most by those who knew him as a father, grandfather, great-grandfather and faithful servant of God.

It is our intention to gather our whole family in the Spring/Summer of 2022 to celebrate our dear parents, details to be announced as we continue to navigate the pandemic alongside our personal health challenges.  Thank you for the continued support during this difficult time.