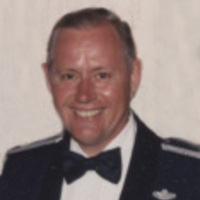 A livestream of the service will be available by accessing https://youtu.be/RFqlodclumU

Paul was born January 13, 1943 at Minot, North Dakota the son of Peder and Ida (Brekke) Pederson. He was raised in Minot and attended Sunnyside Elementary and graduated from Minot High School in 1961. He played on the 1961 ND State Basketball Championship team and was honored as Mr. Basketball for the State of North Dakota.

He furthered his education at the University of Minnesota for one year and then transferred to the University of North Dakota, where he played on the Basketball team with Phil Jackson and completed a Bachelor of Science degree in Physics. He went on to receive a master’s degree Cybersecurity from the State University of NY at Utica. He also did post graduate work at the Naval Post Graduate School.

Paul entered into active-duty service with the U.S. Air Force in 1967 and flew 3 tours in Vietnam and Thailand in a Spotter Plane and as a B-52 Pilot. In addition, he was based at Diego Garcia during the Gulf War and was honorably discharged as a Lt Colonel. He had flown 450 Combat Missions and amassed over 730 hours of combat while in Vietnam.

Paul was united in marriage to Ruth Maxfield on November 25, 1978 at Monterey, California. After his service to his country they retired to Rome, New York for a short time and then at Herndon, Virginia. He was employed with Northrup-Grumman as a defense contractor until retiring in 2017. They moved to Minot this year in 2021.

Paul had received numerous awards and accolades for his time in Basketball as well as his military service. He enjoyed traveling and watching sporting events. He especially enjoyed his trips to North Dakota for family and school reunions. His friends and classmates were very special to him.

Celebration of Life service: Saturday, December 18, 2021 at 11:00 a.m. in Zion Lutheran Church, Minot. A livestream of the service will be available by accessing https://youtu.be/RFqlodclumU

Visitation: One hour prior to the service at the church.
Interment: Arlington National Cemetery, Arlington, VA.
Memorials: In lieu of flowers or plants the family prefers memorials to the Salvation Army, Lord’s Pantry or an organization of the donor’s choice.