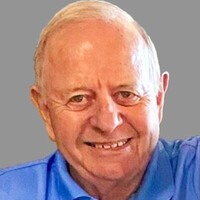 James was born May 21, 1944 in Minot, North Dakota, the son of Wayne and Ethel (Blair) Stewart. He was raised and educated in Minot, graduating from Minot High School in 1962.  He continued his education at Minot Business College and was employed by his father at Nielsen & Stewart, Inc, a GMC dealership. Jimmie was married to Gloria Mikkelson for 24 years. From this union they were blessed with three children, Brenda, Brian and Bridget.

Jim pridefully considered Minot his lifelong home, which was fortified when he bought the GMC dealership from his father in 1981, when Wayne retired. Jim was very passionate about taking care of his employees and customers, often treating them like family.  Jim was united in marriage to Deborah “Debbie” Barnes in 1993 at a chapel in St Augustine, Florida.  Jim retired in 2003, after he sold the dealership to the Ryan Family Group. Jim and Debbie enjoyed travelling, especially south for the winters to Casa Grande, AZ and the Grand Cayman Islands. He was passionate about scuba diving and golfing, especially if it involved family and friends. Lake life was a family staple during the summer months for the Stewart family at Lake Sakakawea. Jim and Debbie also shared a love of caring for exotic birds in their home. His favorite was Casper who spent 25 years as their pet. Jim’s greatest treasure was his family.  He loved attending family events and activities, always taking on the role of comedian and entertainer.  He was a very loving father, grandpa, son and brother who always made friends and family his top priority. His example of honesty, loyalty and integrity will be handed down as his legacy for generations. Jim and his engaging personality will be deeply missed by his family and all who shared in his life.

Celebration of Life service: Tuesday, December 21, 2021 at 2:00 p.m. in Christ Lutheran Church, Minot.
Interment: Sunset Memorial Gardens, Minot
Visitation: At his request there will not be a viewing, however friends may sign a memorial register book on Monday, December 20th from 4-6:00 p.m. in the Thomas Family Funeral Home, Minot.
Memorials: In remembrance of Jim Stewart’s life, the family requests that any charitable donations be made in lieu of sending flowers to The Lord’s Cupboard Food Pantry.