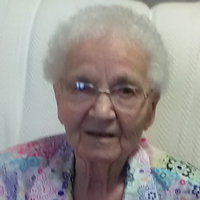 Margaret Bischke Sam, 96, passed away on Friday, December 3rd, 2021 at her home at Edgewood Village in Bismarck.

On December 11, 1942 she married Gust Bischke. They farmed near Gackle until moving to the Graf farm in 1944. They had four children and continued farming there until Gust passed away in 1958. She and her children moved into Medina where she worked as a babysitter, housekeeper, painter and waitress at cafés in Cleveland and Medina. She also worked at the hospital in Jamestown and as a summer bible camp cook at Camp Rokiwan near Spiritwood as well as Outlaw Ranch Bible Camp in Custer, SD. She was the head cook at the Medina Public School for approximately five years.

Margaret married Emil Sam on September 1, 1967 and together they owned and operated “Sam’s Place,” a cafe in Medina from 1972-1982. They took many trips after Emil retired in 1976, visiting friends and relatives all over the United States. Emil died in March of 1996.

She moved to an apartment in Jamestown in 2002 where she was very active as a volunteer at many churches and charities. In 2008, she moved to the Crescent Manor in Bismarck, and later into Edgewood Village, also in Bismarck.

As early as 1947, she was an active member of the Lutheran Church in Medina until present day. Margaret was very outgoing and made friends easily. She was also immensely loving and even cared for her children’s spouses as if they were her own. She made a special effort to cultivate and maintain relationships with her friends and was very loyal to them.