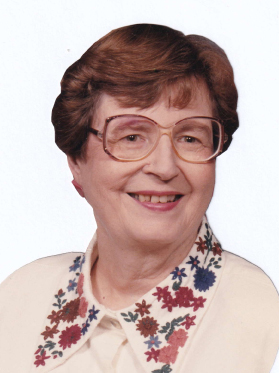 Posted at 14:52h
in Uncategorized
by staff

Grace Meredith Reynolds, 93, Glen Ullin, ND died peacefully on November 23, 2021.  Grace was born in Minot, ND on March 3, 1928, to Warren and Grace (McIntyre) Bacon.  During the summer of 1947, Grace secretly married William Edgar Reynolds from Helena, MT while they were employed at Old Faithful Lodge in Yellowstone Park. They raised their four children in Minot, ND where Bill was the designer at Bacon Sign Company and Grace was active in the Minot Symphony, the Minot Art Association, and Sweet Adeline’s Barbershop Chorus. An avid card player, Grace taught Beginners Bridge for many years at the YMCA and sang in church choir at All Saints Episcopal in Minot, ND. After moving to Bismarck in 1976, Bill operated his graphic art business and Grace was a choir and guild member at St. George Episcopal Church. In 1992 the couple semi-retired to Washburn, ND where they were active in art association events, the Senior Center and local economic development projects. In 2008 they downsized and moved back to Bismarck for apartment living during retirement years. Grace loved to travel, visit with friends, play cards, and high scoring Scrabble games. She often talked about their nationwide trips to attend Bill’s Carlton College reunions, VMF 124 Marine Squadron gatherings, and most of all, their 1988 tour of England.

Grace was preceded in death by her husband, Bill Reynolds, son, Mark Reynolds and infant daughter.

Cremation arrangements were made and no funeral is planned.