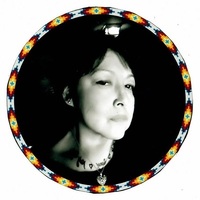 Leslie June Red Hawk, 46, Mandan, died November 28, 2021, at her home.  Funeral services will be held on Saturday, December 4, at 11:00 am at the Ralph Wells Jr. Memorial Complex in White Shield.  A funeral procession will leave from Thompson Funeral Home in Garrison at approximately 10:00 am.

Leslie was born August 23, 1975, to John and Beatrice “Jeanne” (Fox) Red Hawk of Mandan, ND.  She attended schools in Bismarck and Mandan.  Her family later moved to Gordon, Nebraska where she attended junior high and began her athletics in volleyball and girls’ basketball.  She began her high school at Pine Ridge, staying in the girl’s dorm under her aunt Gail Red Hawk.  There she began playing basketball with the Lady Thorpes.  Leslie and teammates J. Labeau and Carla Lapointe never let each other down.  When they played ball, all 3 often made the all-tourney teams.  Leslie was proud to be a Lady Thorpe.

Leslie had been employed with the telephone company in Mandan and later Prairie Knights Casino.

Leslie was married twice to Clint Foutch of Ames, Iowa and had two daughters.  They later divorced.  She then married Keith Belgarde of Belcourt, ND.  Together they had a son and later divorced.

Leslie had been ill for more than 3 years with crippling arthritis, cancer, and heart failure.  Although she was always in pain she had a special Thanksgiving with her children and grandchildren.  Leslie loved her family and was always concerned about them.  Through all her pain she was lonely and missed her dad  a lot.  She also missed laughing and joking with her cousins, especially those that passed away.  Her memories made her lonely.

On the night of November 27, 2021, when the nurses took her medication to her they said she was very happy laughing and joking.  When the nurses made their rounds, they found that Leslie had passed away comfortably in her sleep.

All who knew Leslie, will remember by her laughter and joking personality.  She welcomed and made people comfortable around her dad, John, would say Leslie laughs and sounds like his sisters, Marylee (Adams) Sargeant and Leota Red Hawk.  Leslie’s Minnie-Me I her niece Sloane (Red Hawk) Mesteth