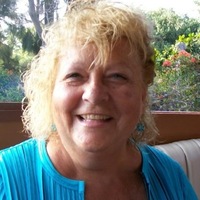 Visitation will be from 9:30 to 11:30 a.m. Thursday at Parkway Funeral Service, Bismarck.

In a final celebration of Vicki’s life, after the committal service, the family will have a reception from 2 to 5 p.m. at Bruno’s Pizza, 910 E Front Ave., Bismarck. As Vicki would say with a smile, “Let’s go get some pizza and beers!”

Vicki (Reis) Shafer was born a twin on June 22, 1943, in Bismarck to Mel and Josephine (Randich) Reis. Raised and educated in the Bismarck area, she worked for her parents at Kullman Motel during her teen years while attending St. Mary’s Central High School before graduating in 1961. After High School, she was a receptionist at Q&R Clinic before marrying her high school sweetheart, Andy Shafer, on August 14, 1965.

She moved to Dickinson with Andy so he could complete his college degree. In Dickinson, she worked for a local watch and jewelry store. After Andy graduated, they moved to Strasburg for a few years. The next job took them to Bismarck, where she would reside for the next 40 years of her life while raising her family. She worked numerous jobs, from raising four boys, to coaching volleyball at Wachter Junior High, managing Shafer Accounting and finishing up at Job Service. Once retired, she made her home in Bismarck during the summer and in Arizona during the winter until moving there permanently in 2015.

Vicki was all about family. It was her world. There wasn’t a sporting event or activity she missed of her boys or grandkids. You knew she was there, as she would be the one with the loudest cheer! From her cabin days at Brush Lake to her place at Viewpoint in AZ, wherever Vicki was, there would be guaranteed laughs, excellent food and good times had. Her optimistic attitude and love for life will be greatly missed.

Vicki was preceded in death by her husband, Andy; her parents, Mel and Josephine Reis; twin sister, Valerie Ciaveralla; father and mother-in-law, George and Josephine Shafer; and other aunts and uncles.