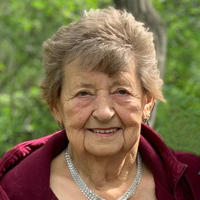 To stream a recorded version of service the following day, access: https://www.mtmsales.net/thomas

Edith Jean was born in Langham, Saskatchewan, Canada on June 18, 1937, a daughter of Cornelius and Susie (Tiessen) Peters. She spent the years of her youth in Langham and was a graduate of Dalmeny High School in June 1956. She attended Millar College of the Bible in Pamburn, Saskatchewan. Following her schooling, Edith went to work as a supervisor at Rush Lake country school in Rush Lake, Saskatchewan,  that included 7 students in grade 1-8.

Edith was united in marriage to Bert Wiens on July 3, 1957, in Langham. They celebrated with another wedding reception in Lustre, MT, where they would make their home the next several years. They were blessed with four children. The family ran a dairy operation for a few years, in Lustre, then moved West of Wolf Point, MT to farm and ranch for several years. In 1967, they purchased Edith’s father’s farm in Kelfield, Saskatchewan and farmed until 1976. Edith was a self-taught musician, who played accordion in a local band.

In 1982, they moved to Las Cruces, New Mexico, where they raced horses and purchased an irrigation acreage to support their stock. The next adventure in Edith’s life led them down the highway for the US Government. Bert and Edith supported White House Communications for 16 years through the George W. Bush and Obama Administrations throughout the US. When not busy providing support to the White House, they hauled explosives for the US Military leaving the highway after 28 years of driving.

They moved to Butte, ND in 2005 spending summers on the prairie and traveling south in their 5th wheel camper for winter visits throughout the US. Motorcycle rides were a staple of their visits to their trucking destinations.

Edith was a member of the First Baptist Church in Las Cruces and attended St Paul’s Lutheran Church in Butte and Liberty Baptist Church in Kief. Edith’s talented hands were lent to crocheting and embroidery, sharing the gifts of her labor with family and friends. Her quick wit, spunk, and caring way reeled in many friends during her time on this earth. She will be deeply missed by all who shared in her precious life and missed most by those who knew her as a wife, mother, grandmother, great-grandmother, sister, aunt, friend and believer.

Edith was preceded in death by her parents, grandson Farron Allerdings and brothers Charles and Earl Peters.

Celebration of Edith Wien’s Life: 11:00 a.m. Wednesday, December 8, 2021 at the Butte American Legion Hall. To stream a recorded version of service the following day, access: https://www.mtmsales.net/thomas
Interment: Butte Community Cemetery, Butte, ND in the Spring 2022.
Visitation will be held on Wednesday, December 8, 2021, one hour prior to the start of the service in the American Legion Hall in Butte.
Memorials are preferred to: Liberty Baptist Church, Kief, ND or to the donor’s choice